Book Review: ‘The Seven or Eight Deaths of Stella Fortuna’

Since I’ve finished Juliet Grames’ debut novel, The Seven or Eight Deaths of Stella Fortuna, my mind has been in somewhat of a haze. This is a good thing. That’s how I know I’ve read a really good book. 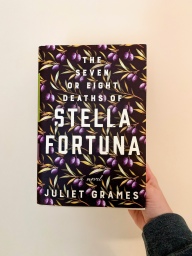 There is so much to this novel; so much heartbreak and power. It will be hard for me to eloquently explain how much I loved this book, but I will do my best!

My introduction to this book started by being introduced to the author herself. One chilly evening, I drove from my workplace in downtown Hartford to Breakwater Books in Guilford, Connecticut, to meet and have dinner with author Juliet Grames.

I didn’t know much about her debut novel, so I spent the days before the event reading and researching. I read the novel’s positive reviews and the impact it has made on Italian-American women and families. I read about how it effectively portrays what Italian immigrants faced when they emigrated to America, and what the women faced in their small villages in Italy after their husbands left them behind.

From Calabria to Connecticut: A sweeping family saga about sisterhood, secrets, Italian immigration, the American dream, and one woman’s tenacious fight against her own fate.

For Stella Fortuna, death has always been a part of life. Stella’s childhood is full of strange, life-threatening incidents—moments where ordinary situations like cooking eggplant or feeding the pigs inexplicably take lethal turns. Even Stella’s own mother is convinced that her daughter is cursed or haunted.

In her rugged Italian village, Stella is considered an oddity—beautiful and smart, insolent and cold. Stella uses her peculiar toughness to protect her slower, plainer baby sister Tina from life’s harshest realities. But she also provokes the ire of her father Antonio: a man who demands subservience from women and whose greatest gift to his family in his absence.

When the Fortunas emigrate to America on the cusp of World War II, Stella and Tina must come of age side-by-side in a hostile new world with strict expectations for each of them. Soon Stella learns that her survival is worthless without the one thing her family will deny her at any cost: her independence.

In present-day Connecticut, one family member tells this heartrending story, determined to understand the persisting rift between the now-elderly Stella and Tina. A richly told debut, The Seven or Eight Deaths of Stella Fortuna is a tale of family transgressions as ancient and twisted as the olive branch that could heal them.

At the event, Juliet, a warm and gracious person, spoke of her novel and how it is based on her grandmother and her family emigrating to the United States. I couldn’t believe that a woman could have that many near-death experiences, but Juliet and her mother (Stella’s only daughter) confirmed!

Juliet read one of her favorite passages from her book. It details what Juliet’s great-grandmother (named Assunta in the book) had to do to survive with three children while her husband was in America. As she read, the Italian-American women in the room nodded with tears in their eyes (from laughter and sadness), saying that it reminded them of stories from their mothers and grandmothers. I sat there in awe after hearing this powerful passage (removing some spoilers):

“This was how the years passed. Assunta tended her three living children…she stitched their clothes and scrubbed them, washed out their diapers and kept them fed with bread she baked from the flour she ground from wheat she grew in the garden she tended. She preserved and pickled and salted and stored so they would never go hungry, even when there was nothing. To keep them warm through the winter she gathered firewood on the mountain and carried it home tied up in a linen cloth she balanced on her head, with Giuseppe strapped to her chest, Stella holding her left hand, Cettina her right. Assunta dug her own stones out and turned her own soil and pruned her own trees and drew her own water from the well five, ten times a day to cook and clean.

This was the trouble with emigration—it dismantled the patriarchy. Because really, what did Assunta, or any woman, need a husband for, when she did every goddamn thing herself?” (43)

Once I heard this, I knew I had to buy this book. Feminist tropes? Strong women? Yes, please. Plus, her family emigrated to Connecticut and lived a block from my office in downtown Hartford. There were many interesting ties. I read it in three days. I spent each night staying up way past my bedtime, and I never wanted it to end.

It’s hard to believe that this story based on real women. Juliet’s grandmother did have an accident that caused her to never speak to her sister for the rest of her life. This is her family’s story. This is what women and families faced, and continue to face. It is an important story about culture, family, and emigration. 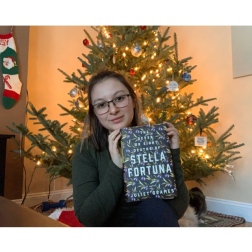 Hardship and trauma are such hard topics, but ones that we must read about. It helps establish our character, create perspective, and keep us far from ignorance.

I was intrigued by the patriarchal values that were, and still are, instilled in Italian culture and many cultures. I was enamored with the woman portrayed in this novel—the strong, raw story of Assunta and the life that she lived in Italy. The trauma and turmoil that Stella went through during her childhood and adulthood, married to a man she did not want to marry, constantly put in situations that shook her to her core. Not to mention, the physical trauma that she went through with her near-death experiences. It was gut-wrenching at times, but sometimes, you can’t turn away from the stories that make you uncomfortable. These women didn’t turn away; they persisted.

This book brought raw emotions. It brought tears and heartache, and I found myself having trouble disconnecting when I closed the book for the night. These are real people who went through so much struggle just to live the American Dream that many take for granted. There is still a struggle; there is still injustice. The women in Juliet’s family faced such strife, from poverty to heartbreak to the patriarchy. It was a remarkable book, and I’m so grateful to Juliet for sharing her family’s story.

If you’re interested in buying The Seven or Eight Deaths of Stella Fortuna, you can buy it here on Amazon or Barnes and Noble.