Looking Back: A Conversation with a WWII POW

On this day four years ago, I was sitting under the hot sun at Omaha Beach in Normandy listening to President Barack Obama and French President François Hollande speak about the importance of liberty and friendship.

Who would have thought I would ever write that sentence—not me!

In 2014, less than a month after I graduated with my Bachelors, I traveled to France with a group of fellow journalism students from Central Connecticut State University to cover the 70th anniversary of D-Day. Looking back, I realized then that it was a tremendous opportunity. Now, four years later, I there is nothing I wouldn’t do to relive those moments.

All of my classmates had their goals for the trip. For one who is deeply connected to history, I knew that my biggest goal was to meet someone who fought 70 years ago on those beaches and share their story.

The first three days of our trip were filled with heavy emotions. I remember standing on a silent Omaha Beach letting the wind whip through my hair as I looked out into the vast ocean. We walked along the innumerable rows of white crosses at the American Cemetery, reading the names and paying our respects to the nearly 10,000 soldiers who lost their lives fighting for our freedom.

We visited Pointe du Hoc, the highest point between Utah Beach and Omaha Beach.  I walked inside the bunkers, originally under German occupancy before American troops captured the area while scaling the cliffs. I remember looking out into the water from one of the edges of the point and taking in the scenery, wondering how a place so beautiful could host such dark and scary moments in history. 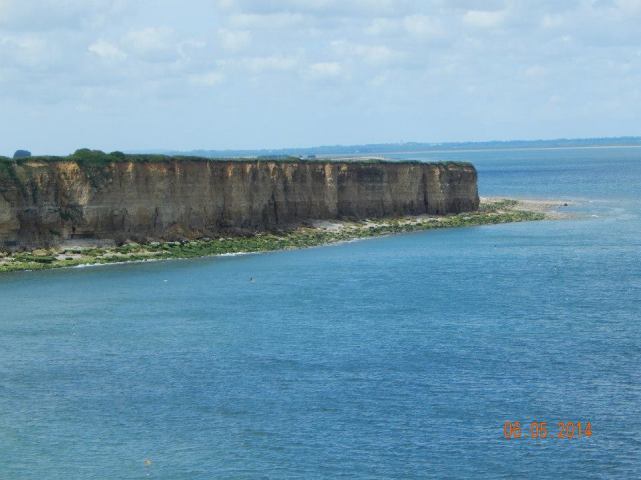 After the commemoration on June 5, our group stood outside waiting for the buses to bring us back from the beach to our designated location. It was an excruciatingly hot day, and my friends and I went to the shade. We then met Bernie Rader and his grandson, Brad, and we talked while waiting for the bus. We casually asked where they were from, and the grandson replied that he was from Connecticut. A town, in fact, not too far from us.

I could not explain the amount of excitement we felt. I remember my classmates and I immediately went into “journalist” mode and started to ask Bernie questions. As soon as we started the interview, his bus came. Heartbroken, we watched the bus drive away. Throughout the rest of the day, I ached to learn more about Bernie and his experience. His kind face and eagerness to share his story stayed in my mind, and I made it my mission to find the Raders and share Bernie’s story.

Long story short, I found him, and later that summer, I met up with Bernie in Connecticut and we had lunch. It was then that I heard his story and wrote my article for the class.

Please read Bernie’s story and remember those who gave up so much so we could be free today. Also, please read and check out all of the other awesome work my class did that summer!

One thought on “Looking Back: A Conversation with a WWII POW”